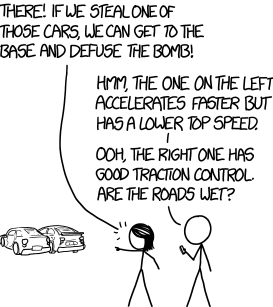 Someone needs value iteration
This assignment is due on Wednesday, November 2, 2022 before 11:59PM.
You can download the materials for this assignment here:

In this project, you will implement value and policy iteration. You will test your agents on Gridworld.

A skeleton file agents.py containing empty definitions for both agents is provided. You also need to download gridworld.py, which includes an MDP game Gridworld and its GUI.

You may import definitions from any standard Python library, and are encouraged to do so in case you find yourself reinventing the wheel. If you are unsure where to start, consider taking a look at the data structures and functions defined in the collections, copy, and itertools modules.

Your code will be autograded for technical correctness. Please do not change the names of any stub functions or classes within the code, or delete any functions we asked you to implement. You can add helper functions if needed.

Once you have completed the assignment, you should submit your file on Gradescope. You may submit as many times as you would like before the deadline, but only the last submission will be saved.

Your agents will be given an MDP game, Gridworld.

In a Gridworld, each state is a tuple of integers \((x, y)\), corresponding to the coordinates on the grid. And for each non-terminal state, there are exactly four actions, going UP, DOWN, LEFT, or RIGHT. Gridworld also has two parameters, noise and living_reward.

However, your agents should be as generic as possible, and should not assume anything related to Gridworld in your agents. In fact, you should not import gridworld.py into your agents.py. Instead, you agents shall take in a generic game object at initialization, with game implementing the following interface:

Write a value iteration agent in class ValueIterationAgent, which has been partially specified for you in agents.py.

ValueIterationAgent takes in an MDP game and the discount factor \(\gamma\) on construction. It then should initialize all the state values to $0$ (i.e. \(V_0(s) =0\)). You need to implement the following methods for ValueIterationAgent using current estimated values \(V^*\), which is \(V_0\) at the beginning.

Then, once you implemented these, you can implement agent.iterate(), which it to iterate only once using Bellman equations, and store the new $V_{k+1}$ in place of $V^*$.

Important: Use the “batch” version of value iteration where each vector \(V_{k+1}\) is computed from a fixed previous state \(V^*\) (like in lecture), not the “online” version where one single weight vector is updated in place. The difference is discussed in Sutton & Barto in the 6th paragraph of chapter 4.4.

For more instructions, refer to the lecture slides and comments in the skeleton file.

The following command loads your ValueIterationAgent:

Hint: On the default BookGrid, running value iteration for 5 iterations should give you the output below.

Your value iteration agent will be graded on a new grid. We will check your values, q-state values, and policies after fixed numbers of iterations and at convergence (e.g. after 100 iterations).

All other values (Q-state values, policies) should be calculated the same way as ValueIterationAgent, and the only difference is at the iterate() method. However, if you need to implement helper functions or override ValueIterationAgent’s methods, you can add them as well.

The following command loads your PolicyIterationAgent:

BridgeGrid is a grid world map with a low-reward terminal state and a high-reward terminal state separated by a narrow “bridge,” on either side of which is a chasm of high negative reward. The agent starts near the low-reward state (the yellow block). With the default discount of \(0.9\) and the default noise of \(0.2\), the optimal policy does not cross the bridge. Change only ONE of the discount or the noise parameters so that the optimal policy causes the agent to attempt to cross the bridge. Put your answer in bridge_crossing() of agents.py.

To change the discount or noise in Gridworld GUI, use --discount or --noise. To use the bridge grid, add bridge to the end of the command line. The default parameter corresponds to:

Consider the DiscountGrid layout, shown below. This grid has two terminal states with positive payoffs (in the middle row), a close exit with payoff +1 and a distant exit with payoff +10. The bottom row of the grid consists of terminal states with negative payoffs (shown in red); each state in this “cliff” region has payoff -10. The starting state is the yellow square. We distinguish between two types of paths:

Questions 4a through question 4e should each return a 3-item tuple of (discount, noise, living reward) in analysis.py, or string ‘NOT POSSIBLE’ if it’s impossible to achieve.

To quickly get to the converged policy, you can use --iteration option. For example

Will begin the GUI on the 100th iteration.