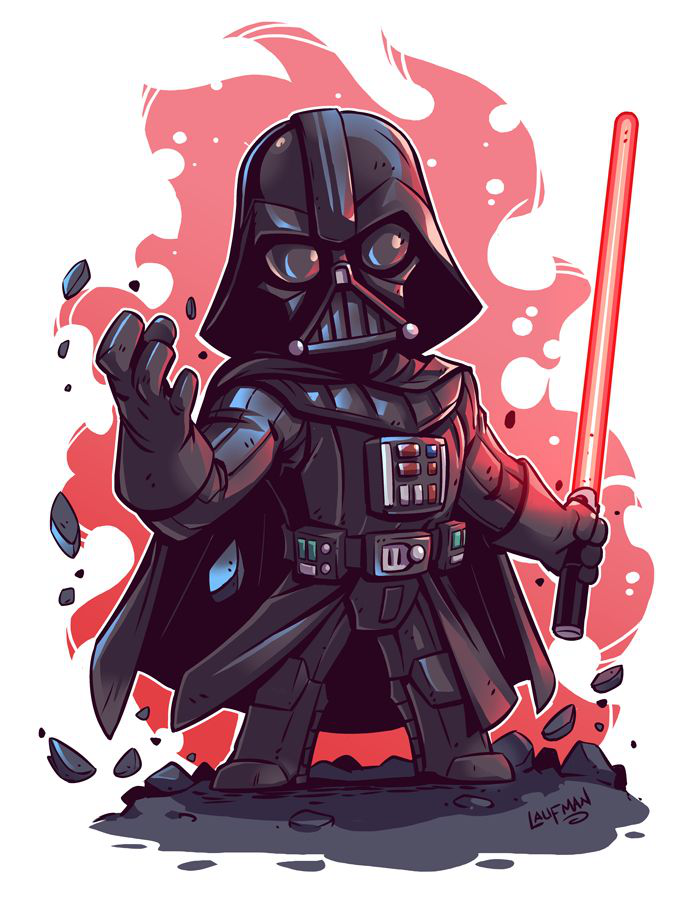 Darth Vader Copyright: Pinterest
This assignment is due on Wednesday, November 23, 2022 before 11:59PM.
You can download the materials for this assignment here:

The First Galactic Empire dispatched Darth Vader and their evil robot R2-Q5 to destroy the base of Rebel Alliance. Our brave R2-D2s will battle with the dark robots and reclaim the land of Rebellion. May the force be with you, R2-D2s.

In this assignment, you will combine your knowledge of reinforcement learning and the adversarial search game tree to teach the R2-D2s how to play optimally in a laser-shooting game.

A skeleton file r2d2_hw3.py containing empty definitions for each question has been provided. Some helper functions and functions required for GUI are also provided. Please do not change any of that. Since portions of this assignment will be graded automatically, none of the names or function signatures in this file should be modified. However, you are free to introduce additional variables or functions if needed.

You are strongly encouraged to follow the Python style guidelines set forth in PEP 8, which was written in part by the creator of Python. However, your code will not be graded for style.

Once you have completed the assignment, you should submit your file on Gradescope.

0. Explanation of the Game

The action space of this game is defined as a row times cols sized rectangle board. Where one robot occupies a single cell on the board at any given time of the game.

The games starts with two droids at two different location of the board. Both droids start with the same number of shots that they can perform. Both droids need to perform one of actions available to them at each round of the game simultaneously. Droids can either move up, down, left or right, if they are not blocked by the walls on the direction they are moving towards, or they can choose to shoot, if they have shots remaining.

If both droids decide to move and not blocked by the wall, but they are either

Then the action does not take actual effect (although it is a “valid” move to them). Notice that if one droid decides to step onto the other one’s previous location, but at the same time the other droid decide to move away (not heading each other), then the action is valid and will be performed.

If a droid can and decide to shoot, a laser beam will be emitted from its location to all four sides all the way to the walls (i.e. occupies the entire row and column it’s on, see the image). If the other droid is on the path of the laser (after it moved, if it decided to) of the laser beam, then the other droid is count as hit, and the shooting droid gains a point. Notice that both droids can shoot at the same time, and if they are both hit at the same time, neither hit is counted.

The game ends if both droids run out of shots, or the game has ran for 50 rounds, whichever comes first. When the game ends, the side that has the more points wins, otherwise it’s a draw.

Your droid should have two public fields called location and shots which represents the current location and number of remaining shots of the droid respectively.

Note that you shouldn’t be assuming any other methods or fields for your agents in the later part to access, because we will be using our implementation when running your agents.

In this step, we will implement two types of agents, QAgent and MinimaxAgent. You will have to implement a basic Agent interface that looks like this:

Note that you should be implementing the methods in the corresponding agents, not the Agent abstract base class.

For the following agents, you can assume that you are always dealing with a 4 by 4 game board as in the GUI.

Your QAgent should be using the reinforcement learning algorithm Q-Learning to learn from the games on-the-go. That is, you starts with a Q-Learning agent with a black Q-table, and for each action you do, the next time get_best_move is called, you should be updating your Q values based on the points you get and other factors.

You should be defining your own learning rate, discount factor, explore epsilon. Also, you have to define two very important things for your Q-Learning Agent:

Apart from implementing the required two interface methods, you should be (and definitely will have to) implement other helper methods relating to your Q-Learning algorithm. For example, a method that takes in the droid and the current state, and choose the best action based on the Q-values.

[20 points] Your droid will be given 3 minutes to train against our implementation of Q-Learning Agent (that is already being trained, and won’t learn while training with your agent). Then it will play another 100 games with our agent, from which the number of not-loosing games are the percentage of the total 20 points you get. For example, if after the training, in the 100 games that counts, you won for 80 games, drew for 8 games and lost for 12 games, then you get \(20 \times .88 = 17.6\) points.

Your MinimaxAgent should use the adversarial search tree and the Minimax algorithm to search for the optimal action to take for your droid. You should be defining your own depth to search for, as well as if you want to also implement alpha-beta pruning.

Notice that this game is different from your normal Minimax games, in a way that two sides move simultaneously. There are two ways you can mitigate this, one is the optimistic assumption, one is the pessimistic assumption. The optimistic way is to assume that your opponent moves first, such that you can “predict” what the opponent move will be. The pessimistic way is to assume that you move first, and your opponent can “predict” what your move will be. Both ways have its pros and cons, and can have consequences on the decisions your algorithms make. You can decide to implement either assumptions, or to try out both ways and use one of them, or combine the result from both assumptions using some methods.

[5 pts, manually graded] You should be defining your own evaluation function when the depth has reached or the game has ended. This can be quite similar to the reward function of the Q-Learning Agent, or it can be totally different. Any reasonably good evaluation function should get you full points.

[20 points] Your droid will play with our pre-trained Q-Learning Agent for 5 minutes or 100 games, whichever comes first, and a minimum of 20 games must be played (otherwise you get 0 points). You should tune your search depth to be reasonable so that it won’t take too long for each round (you can also make it adaptive by having a timer). The games you won worth 1, and the games you drawn worth .5, that over the total games played is the percentage of the total 20 points you get. For example, if you finished 100 games in 5 minutes, you won for 80 games, drew for 8 games and lost for 12 games, then you get \(20 \times (80 + 8 \times .5 ) /100 = 16.8\) points.

You can start the GUI by executing

Where you can set each agent to be either QAgent or MinimaxAgent. And you can set Train Episodes to be a number so that the agents will train for that many number of rounds (not number of games) before the GUI pops up.

For example, if you want to have two Q-Learning Agent train with each other for 100,000 episodes, you can have

Or if you want to train the Q-Learning Agent with a Minimax Agent for 100,000 episodes, you can have

After the GUI has popped up, you can see how two droids play against each other by pressing the spacebar to go to the next episode (round). A new round will be automatically restarted once a game has ended.

We also provided a Agent called KeyboardAgent, where you can have fun playing against computers. You can replace the R2Agent with KeyboardAgent, for example, if you want to play against your MinimaxAgent, you can run GUI with

If you want to play against your QAgent, you might want to train it first. You can have

Meaning you first train the QAgent with a MinimaxAgent for 100,000 episodes, and then when the GUI pops up you can play against it with your keyboard.

To use KeyboardAgent, use WASD to move up, left, down, and right respectively, and use space to shoot.